The Surprising Reason 11:11 Keeps Popping Up

7 Sacred Signs From The Universe

I don't know about you but 11:11 started appearing regularly for me in 2010 and seeing double, triple and quadruple numbers still continues for me to this day.

I want to write about this today because I have just learned even MORE ways that the universe sends signs. It's in a free report that reveals the Universe’s secret “Sign Posts” that point the way to success, wealth, & happiness.

Angel numbers : I remember when I was driving our youngest daughter to town all the time when she was going for her Learner drivers license. We would always see numbers together. They often appeared as the time, degrees and cd track number. For example,  2:22 pm while track number 22 of the cd was playing and it just so happened to be 22 degrees outside. This became a daily habit that we had to research it. We found out they were "Angel Numbers" so from that point on, when ever we saw a bunch of the same numbers, we just laughed and looked at each other as we said out aloud -  "Angels" :)  My husband started seeing them too and it's now a daily occurrence for many people all around the world.

Animal symbols : I have only experienced a few of these. I recall a butterfly after someone had passed over that kept on hovering around me when I was in he garden. It sat on the tip of my garden shovel and we looked at each other for a moment. It was in that moment that I knew, everything was okay.

Songs : (omg!) Songs was a big one or me especially after mum passed over. It was like she was communicating with me through songs on the radio, in shopping malls ect. Just incredible!  5 weeks after Mum had left her body, I was drawn to have a psychic reading. This feeling was pulling me in so strongly so I booked a reading and of course, Mum turned up in the reading :) When I left the psychic, I got into the car, turned on the radio and that song "I can see clearly now the rain has gone" was playing. Ahhh Mum. I had to giggle! :) Perfect!

Dream messages : It was 2018 I think . . . and I had to feed our friends cat as they were going on holiday for the weekend. On the last night, I had a dream that there was a snake in their lounge room. It was only a little snake in my dream . . .  but hey, it was still a snake!  I remember waking up and shaking off the dream and then went back to sleep, not thinking anything of it. That morning, I went to my friends house and just as I got to the door, a "voice" came into my head and said "be careful of the snake".  Oh man! So I went in, kept my eyes wide open, fed the cat and got out again. I simply HAD to mention this to my friend because what if it was real? .... They called me when they got home that night and yep, there was a snake, a baby one, but still - it was a snake!

Books fall off the shelves : I have never had this happen to me (thank god). In all honesty, I think I would freak out if it did! (maybe thats why it hasn't) ;)

Printed words : This has been another one for me in the past where I would flick to a random page in a book and the words were there that I needed to see.  Not so much anymore though - or maybe I need to pay more attention to this one. Hmmmm . . .

Repeated experiences : I think we've all done this one! My relationships when I was younger were always with the same kind of people . . . lack of communication with my dad lasted well into my 40's, money struggles too (those two just played over and over like a broken record) . . .  Until I decided to start shifting energy with my thought and the way I was feeling (and that's another story)

But hey look, I just shared my personal experiences because I read the 7 Sacred Signs From The Universe and it opened my mind up a lot and helped me to recall all of the things I wrote above.

In the free report they cover so many things in more depth and I found it really quite fascinating.

They explain what certain numbers mean, what a crow, hawk, dragonfly and more animals can mean for you as symbols. How songs can turn up right when you need to hear them and what books flying off the shelves means . . .  omg . . .

It's an easy read so I want to share it with you. I hope you enjoy it as much as I did :) 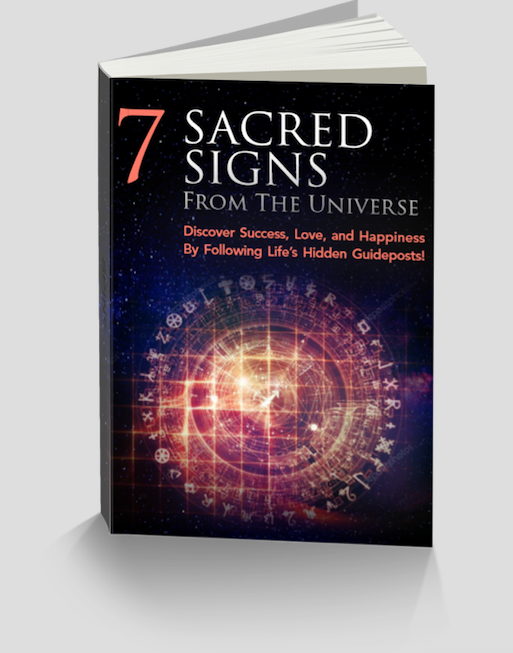 The above is a product that I know like and trust. They get the "Mindset and Energy" seal of approval for being simply amazing, fun and uplifting and will help spiritual path seekers like you. I'm sure you will enjoy it as much as  have :)

Note: Some of the products above are affiliate links which means that if you purchase them, I get a commission, small pony, magic wand or some kind of other amazing treasure. I know awesome, right? You can rest assured, I only promote things to you that I really think are fantastical (and I protect you like a mother bear)